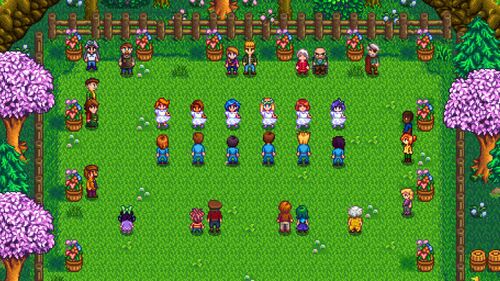 The Flower Dance is a festival that takes place on the 24th of every Spring. The player enters the dance by entering Cindersap Forest between 9am and 2pm. The forest cannot be entered before 9am.

The dance takes place in the far west of the forest, across the bridge that is south of the Wizard's Tower. This area is accessible only during the Flower Dance.

During this festival, the player can dance with one of the bachelors or bachelorettes. The player must talk to them until the "Ask <name> to be your dance partner?" dialogue pops up (normally 2x), but they will refuse unless they have at least four hearts of friendship with them. The player can talk to the other villagers and they will have event-related dialogue.

Dancing with an NPC will increase friendship with the player's partner by 1 heart (250 points). In a multiplayer game, players may also dance with each other. If the player is divorced, their ex will refuse their dance proposal and respond with angry dialogue instead.

Once the player talks to Mayor Lewis, the dance begins. After the dance, the festival ends and the player is returned to The Farm at 10pm.

Pierre has a booth from which he sells the following items. 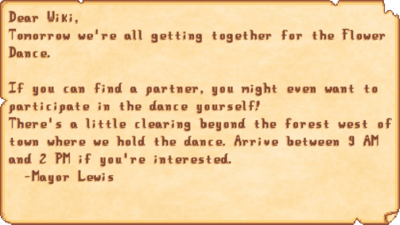 If the player is unable to choose a partner, or opts to not dance, the following dance pairs will take part:

If the player chooses to dance with someone, they will replace the partner listed above. The replaced dance partner will stand below the dance, next to Pierre and Caroline.