Hay is dried Grass. Its only value is to feed Farm Animals. It can be placed into the Shipping Bin but yields

Hay can be harvested from Grass using a Scythe or Golden Scythe, as long as there is an unfilled Silo on the farm. Using a Scythe, there is a 50% chance of producing 1 Hay each time a tile is completely cleared of Grass; using a Golden Scythe, the chance is 75%. Note that although Grass can also be cleared using any Weapon or Bomb, no Hay is produced in these cases. All Hay harvested from Grass is immediately placed directly into the farm's Silos.

Each Silo can store up to 240 pieces of Hay. Hay stored in Silos can only be withdrawn using the Hoppers found in Coops and Barns. When right-clicked, a Hopper will dispense Hay equal to the number of animals living in the building — but no more than the number of empty slots in the building's Feeding Bench. Therefore, it becomes impossible to withdraw Hay from a Hopper in deluxe Coops and Barns where the autofeeder always keeps the feeding bench full (see Tip). Right-clicking on a Hopper if Hay is the active item in the player's inventory will transfer the entire stack of Hay into the Silos.

Hay is also obtained when harvesting Wheat: there is a 40% chance that each harvested Wheat will drop one unit of Hay. This Hay is added to the player's inventory (or the Junimo Hut storage, if harvested by Junimos) — it does not go directly into Silos.

Hay can be purchased, either from Marnie's Ranch for

50g or from the Desert Trader who sells 3 Hay in exchange for 1 Omni Geode. Marnie may randomly send you 10 Hay in the mail. 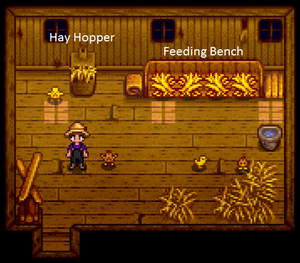 The interior of a basic Coop showing the locations of the Hopper and feeding bench.

All Coop-dwelling and Barn-dwelling Animals expect to eat 1 Hay per day as food whenever there is no fresh Grass available. This Hay must be placed on the feeding bench in the animal's home building; the Hopper in the building facilitates withdrawing Hay from the Silos to place on the bench, although the Hay can come from any source. The autofeeder in Deluxe Barns and Coops automatically fills the feeding bench. If unfed, animals will not die, but they will be unhappy.

Given that all Grass on the farm disappears on Winter 1, it is advisable to Harvest as much Hay as possible by Fall 28 in preparation for the winter. Building multiple Silos may be necessary to provide sufficient storage capacity for Winter. Alternatively, Hay can be withdrawn via a Hopper and placed into Chests. If the farm runs out of stored Hay during the winter, the only ways to feed animals are by purchasing Hay, or by growing Wheat in the Greenhouse (if it has been unlocked).

Hay is not used in any Quests.

Fodder Bundle on the Bulletin Board.

Hay is used in the spool of the Sewing Machine to create a Grass Skirt.