This article is about the monster. For the drop, see Slime.

Slimes are enemies that can be found in various locations, including The Mines and the Secret Woods. They come in five different variations, all based on the same sprite and code (a color hue is added to the grey sprite found in data files). You need to kill 1000 Slimes of any color for Monster Eradication Goals. All Slimes in the game count towards this goal (e.g., in the Secret Woods) except for Big Slimes and Slimes raised in a Slime Hutch (by means of a Slime Incubator or Mating). Slimes spawned by killing a Big Slime do count towards the goal.

Each color of slime has a unique stat set.

All colors of slimes, both male and female, have an attack zone of 4 tiles in all directions. If the player enters this zone, the slime will attack.

Slimes attack in two ways. Either they bounce slowly at the player, or they "charge" to jump at the player from a distance. The charging animation resembles the slime becoming almost flat to the ground. If there is an obstacle in the way, the charge jump will cause them to bounce off the object (sometimes multiple times if they're in a tight spot). Occasionally slimes will enter a state of rage after being attacked, causing them to move significantly faster and have red eyes.

Being hit by a slime reduces health and may cause the Slimed debuff. These effects can be prevented by equipping a Slime Charmer Ring.

When a slime is hit, it will be knocked back a short distance, out of range of melee weapons. The best strategy to kill slimes is to quickly move into striking distance to prevent their charge attack and corner them against a wall or, ideally, in a corner (of walls, rocks, or both). Both the charged and regular attacks may be avoided by using a defensive move (such as the block of the regular sword). Timing a block with a sword well can allow the player to get a decent amount of damage. Otherwise, offense is the best defense.

The Slime Charmer Ring prevents all damage from Slimes. This ring is obtained as a reward for killing 1000 slimes for the Adventurer's Guild.

Any slimes have a 49% chance to be male and will retain its original properties such as being special. Male slimes have a pom-pom like antenna dangling above their "heads", 25% more health over the base HP, and 1 more damage. When it is passive and is attacked, male slimes have a 2.5% chance to increase its damage by 50% and do a shaking animation. 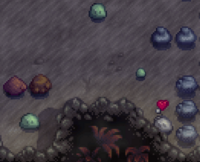 Iron Slimes mating in the Quarry Mine

In a Slime Hutch or (less commonly) The Mines, Secret Woods, Skull Cavern, Tiger Slime Grove, or Quarry Mine, male and female slimes may mate to produce a small slime that will grow into either a male or female adult slime.

Note: Once a Slime Hutch has been built on The Farm, any Green, Blue, Red, Purple, or Tiger slimes encountered anywhere may drop a Slime Egg. [2]

Special Slimes have a very small chance to replace any normal Slime. They can be identified by their antenna with a small yellow star.

Special Slimes have 3 times more health than normal Slimes and will deal twice as much damage per attack. They can drop special items.

Big Slimes have similar attack behavior to the smaller slimes. When killed they have a 75% chance to split into 2-4 smaller slimes which will attack the player. Those small slimes give XP as the regular slimes above do.

Big Slimes are most common as Big Purple Sludges in the Skull Cavern. They can also appear on slime-infested floors of the Mines in the color for that section of the Mines.

The Prismatic Slime is a special monster that can be found in The Mines, Quarry Mine, or Skull Cavern on any level, after accepting the Wizard's Special Order "Prismatic Jelly". It looks like a regular slime that changes color over time. The Prismatic Slime can appear when the mines are in a "dangerous" or normal state.

A Prismatic Slime will always drop the Prismatic Jelly that must be delivered to the Wizard in order to complete the Special Order.

While the special order is active, each slime spawned in The Mines, Quarry Mine, or Skull Cavern has around a 1.2% chance to be replaced with a Prismatic Slime, depending on daily luck. The exact chance is 0.012 + Daily Luck / 10.0 [4].

Note that a Prismatic Slime has very high HP (1000) and damage (35), and is thus considerably stronger than the slime it replaces.

Dangerous Slimes are a variation that can be found in The Mines or Skull Cavern on any level after accepting Mr. Qi's challenge "Danger in the Deep" or "Skull Cavern Invasion", or after activating the Shrine of Challenge. They replace regular slimes and appear as a larger slime with sunglasses and a smile. They are relatively stronger than their normal variations, with 2x health and attack.

Sometimes these slimes will appear stacked on top of each other. This variation is called a Stacked Slime. When hit with a weapon, the top slime will come flying off similar to a Squid Kid projectile. The Slime Charmer Ring does not grant immunity to this attack. After all slimes are knocked off, the bottom one works as a normal slime.

In addition to the drops list above, the color of each variation is random and may have additional drops depending on the color range chosen. [2]

Color groups are mutually exclusive and listed in the order the game tests for them. (For example, a slime may fall into the White and Gray categories, but White is tested for first, so the slime would drop Iron Ore and not Stone).

The background color of the "RGB Values" column in the table below shows the color range that a slime can be to receive the drop.