I see some text under the "Favourite Thing" part that reads, "Entering different countries as a favorite-thing will cause the favorite-thing to appear on the sign when riding the bus to Stardew Valley." First of all that should probably be on the Easter Eggs page rather than the Stardrop page, second of all, does anyone have any screenshots or evidence or more information regarding this? --Chaz (talk) 05:04, 9 October 2016 (BST)

I assume the easter egg was appearing somewhere in the deleted scene of the intro i thumbed. I tried new games with USA, United States, Canada and France as my favorite thing with no difference in the intro. 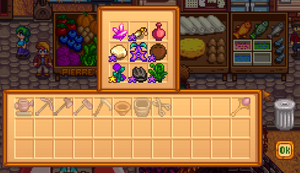 At least one of the bugs with stardrops being held in inventory was patched out in v1.3 (but didn't appear in the release notes). Anyone who discovers that bugs/exploits listed on the page don't work anymore, please comment! My experience has been that stardrops cannot be held in inventory at all (using stardrops spawned with the CJBItemSpawner mod), but I'm curious if the one obtained by completing the museum collection is still bugged. Thanks, margotbean (talk) 20:16, 4 August 2018 (BST)