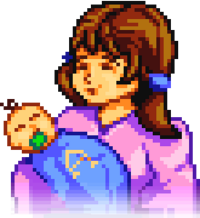 Clara is Alex's deceased mother. During Alex's eight heart event, he states that she died 12 years ago, some time in the summer. When she died, Alex had to move in with his grandparents, George and Evelyn, who were Clara's parents.

During Alex's memory of her, Clara is seen holding Alex as a baby and singing to him. She has brown hair, with two blue hair bands, and is wearing a purple shirt.

In the memory, Alex is wrapped in a blue blanket with the letter "A" sewn on it, and has a green pacifier in his mouth.

Her relationship with Alex's father is assumed to have been strained, since Alex describes him as being either absent or drunk.

Clara's surname is unknown; it may or may not be "Mullner". The name "Mullner" is used in only three places in the game:

On the nightstand in George and Evelyn's bedroom, there is a letter from Clara.