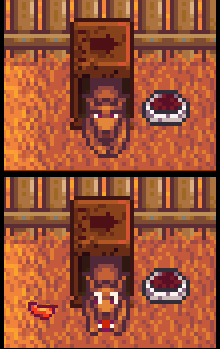 Dusty is Alex's dog who lives in an old fenced-off box near The Stardrop Saloon.

Dusty is involved in two of Alex's heart scenes: four hearts and ten hearts. If you have a high friendship level with Pam, she will tell you that Dusty may look scary, but he is too lazy to attack you.

Normally only Dusty's glowing eyes are visible, but he partly appears during the heart events with Alex, and after completing the Trash Bear's requests. Then he is generally visible every day, unless it is raining.

Dusty is at least 12 years old, having apparently witnessed Alex's home life prior to Alex moving in with George and Evelyn.