The Gotoro Empire is the opposing force that is fighting against the Ferngill Republic, in which Stardew Valley is located. Not much else is known about the empire other than a few villagers mentioning the existence of the opposition.

The Traveling Cart merchant claims that the items she has have been smuggled from the empire as well. 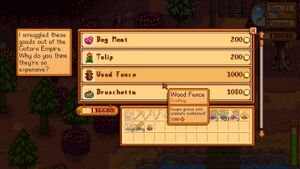 Items that the Traveling Cart merchant claims are from the Gotoro Empire.

Kent, who returns in Spring of Year 2 after fighting overseas, will describe how dreadful it was in a Gotoro prison camp when you gift him something he hates, as that item was also given to him in the prison camps. Another mention of the empire is when Kent's son Sam tells you about his father before he actually returns to Stardew Valley through regular dialogue.

The Gotoro Empire is also referenced in the Museum Library in the titles of some books. These books, located in the bottom right bookcase, are present from the beginning and you can only read the titles of them.

In Harvey's bedroom a poster can be found comparing the fighter planes of the Gotoro Empire and Ferngill Republic.