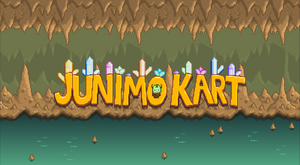 Junimo Kart is a game playable on the arcade machine in The Stardrop Saloon. It is initially locked and requires the Skull Key to play. The day after beating all six levels on "Progress Mode," a Junimo Kart Arcade System will be sent in the mail.

In the game, the player plays as a Junimo in a cart moving to the right side of the screen. The only control they have over the cart is jumping, with the left mouse button or space bar. Holding down the left mouse button or space bar will make the cart jump higher. Pressing p will pause the game. Along the way, gaps, railway ends, and other level-specific obstacles will be encountered, which must be avoided by jumping. Not jumping at the right time or falling through a gap will result in losing a life. There are two modes in the game: Progress Mode and Endless Mode.

In Progress Mode, the player starts with 3 extra lives. When all lives are lost, the run will end. After completing a stage, lives will be replenished up to a minimum of 3. Collecting 100 coins will also grant an extra life. Each level also has three pieces of fruit: Cherries, Orange, and Grapes. Each is worth 10 coins, and completing a level after having collected all three pieces of fruit grants another extra life (if the player finishes the level with fewer than 3 lives, this extra life is granted after their lives are replenished to 3). After finishing 6 levels, the game ends.

In Endless Mode, the player only has one life; dying will end the run. Score is tracked along the run, with points gained by moving through levels. Each coin collected gives 40 points, and collecting one of the three fruits gives 1000 points. Finishing a level gives 5000 points, and a bonus 5000 points at the end of a level for collecting all three fruits. All 8 levels are played in order in this mode (all except "???"). In the event that the player finishes the last level in this mode, it will repeat from the first level.

Some levels reuse existing background music, while others have songs composed specifically for them.

(Music: Mines (Crystal Bells), Mines (A Flicker In The Deep), or Mines (Star Lumpy) at random)

The first level is relatively straightforward; there's the occasional falling boulder to worry about, but otherwise just focus on jumping and grabbing coins/fruit. Make sure to land on top of an obstacle if it cannot be avoided, because that would result in destroying it.

The second level is fairly well-previewed by its title screen: downward slopes are slippery, and there are a lot of independent upward slopes that will need to be jumped in between. Sliding down slopes gives extra speed, which translates into longer jumps, and can take some getting used to. Finishing this level in under 60 seconds will result in skipping The Gem Sea Giant and Slomp's Stomp, and going straight to Ghastly Galleon.

This alternate second level has an empty preview screen with a title "???". The path to this level is indicated by dots on the level map, and occurs at the wooden bridge between the rocky and ice areas. To reach this stage, clear "Crumble Cavern" without losing any lives and collecting all coins and fruit. The scenery is that of a dark cave covered in stalagmites and stalactites with a water floor. With no unique obstacles or boulders, clearing this level should be no extra challenge. This level does however contain a huge amount of coins, so try to collect as many extra lives as possible.

The third level takes place underwater, resulting in slower falls. In addition, there's a large whale on the right side of the screen that periodically spews bubbles, which (like all hazards) are fatal upon impact unless the player lands on top of them. Collecting coins/fruit may be difficult, if not impossible, without jumping off the top of bubbles to reach high-up rails.

This alternate third level is chosen at random. It's somewhat an inversion of Slippery Slopes: each upward slope is sticky, and slows the player down. Slowing down is bad because a giant bouncing slime is chasing the player; it will catch up if the player slows down too much. This is the fifth level in Endless Mode.

On the fourth level, the player moves faster, meaning jumps cover a larger distance and the player has less time to react to what's going on. This level has large gaps that need to be jumped over and some narrow platforms to land on. Additionally, there are ghosts which move in circular patterns and are fatal on contact, even when landed on.

This level has pairs of giant purple mushrooms; riding on one causes it to lower and the other to raise upwards. How long the player spends on the mushrooms must be timed precisely to successfully reach the next rail. There are occasional smaller red mushrooms that shoot slow projectiles upwards; carefully jump through a gap in the pattern to avoid dying. There are also smaller purple mushrooms that can be bounced off of, similar to boulders and bubbles. This is the sixth level in Endless Mode.

This alternate fifth level has, as the title screen suggests, lots of adjacent diagonal ramps, leading to potential confusion on where the player should jump from. There are also falling boulders, like Crumble Cavern. It also has a tendency towards stretches of mostly empty space scattered with short sections of rail, requiring constant jumping to safely make it across. This is the seventh level in Endless Mode.

The final level is full of short rails at widely scattered heights, making it very easy to slip off. This is the eighth level in Endless Mode.

Junimo Kart Prior to Version 1.4