Dance of the Moonlight Jellies 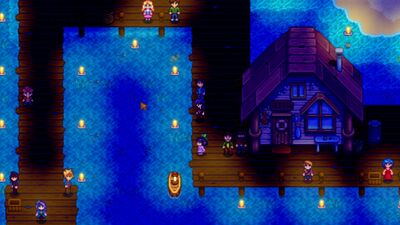 The Dance of the Moonlight Jellies is a Festival that takes place on the 28th of every Summer. You attend the festival by entering The Beach between 10pm and 12am. (You cannot enter the beach before 10pm.) When the festival ends, you will be returned to The Farm at 12am. Attending the festival is optional.

On the day of the festival, if you use a Warp Totem: Beach you will consume the totem, but you will not be transported to the beach. Instead, a popup box reading "Today's festival is being set up, come back later" will be displayed on screen.

If you have not yet repaired the wooden bridge at the beach, it will be temporarily repaired during the festival scene, allowing you to speak to the characters in that area.

If you have any Crab Pots placed in the water on the beach when the Dance occurs, the pots will not be present upon arrival to the beach, but will appear during the cutscene. 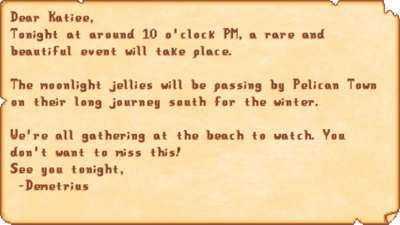