The Festival of Ice takes place on the 8th of every Winter. The player attends the festival by entering Cindersap Forest between 9am and 2pm. When the festival ends, the player will be returned to The Farm at 10pm.

The festival features ice sculptures, snowmen, and igloos. There's also an Ice Fishing Contest the player can take part in along with Pam, Willy, and Elliott. The player must catch at least five fish to win the competition, or else Willy will win. The first time the player wins, their prize is two tackles (a

Barbed Hook and a

If two or more players in a Multiplayer game win the Ice Fishing Contest, all winning players receive the reward(s).

The Traveling Merchant has a booth from which she sells the following items.

Each year, unless she is married, Penny will ask what kind of snowman she and Jas should build. Three responses are possible:

Willy will also ask if the player is they ready for some ice fishing. Three answers are possible: 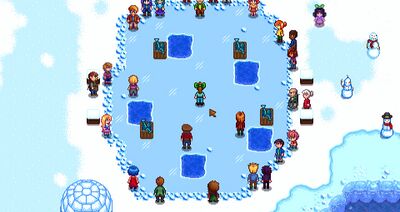 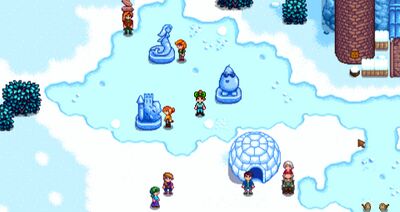 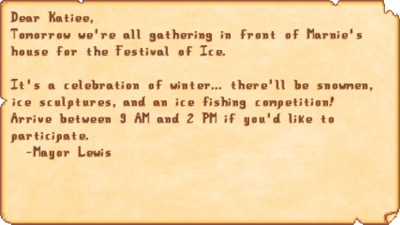