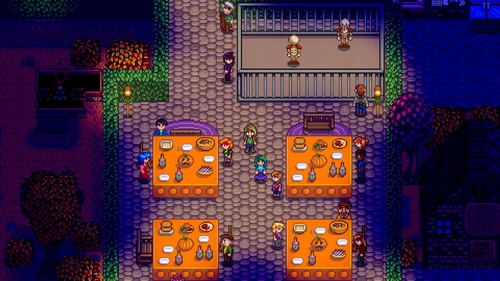 The Spirit's Eve festival takes place on the 27th of Fall every year. The player enters the festival by entering Pelican Town between 10:00 pm and 11:50 pm (note that at 11:50 pm it is too late to enter). When the player leaves the festival, they will be returned to The Farm at 12:00 am.

The festival features a maze where the Golden Pumpkin can be obtained. According to townsfolk rumours, the maze was supposedly created by the Wizard. Pierre has a shopping booth where the player can purchase festive items including a rarecrow, a Jack-O-Lantern, and the Jack-O-Lantern recipe.

The haunted maze was supposedly set up by M. Rasmodius, the Wizard. The villagers say he was so committed to creating a frightening maze that it took him all day to set it up.

A large majority of the townspeople are either frightened or confused by the maze (especially Abigail, who can't continue because she cannot walk past spiders). Jodi does not allow Vincent to go in the maze because it is "too scary for children". 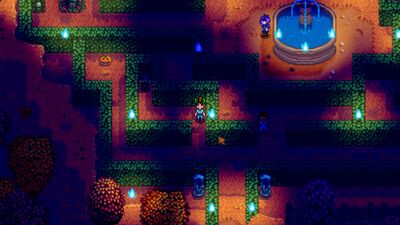 Like all mazes, the "keep going left" mentality is present here. Just keep on going left; it isn't a huge maze. It may be worth it to stop and talk to the characters, as some of the dialogue can be amusing.

The trick to reaching the end is to take the secret passage, which begins just underneath and to the left of the "?" signpost, and then continues to the right inside the cave to the North. It weaves to the left and right, which requires a little bit of blind navigation. Wearing a ring which provides light, such as the Glow Ring, will allow the player to track their movement more easily. They will exit down into the treasure section of the maze. Inside the treasure chest is a Golden Pumpkin. 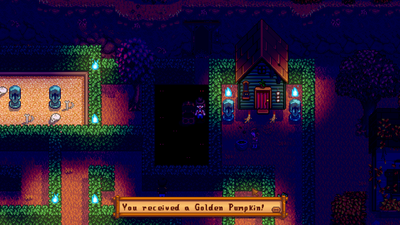 Pierre has a booth from which he sells the following items: 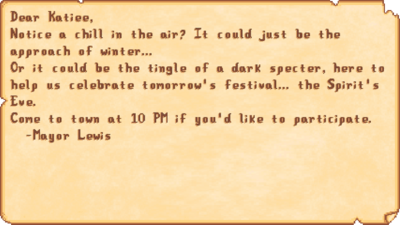