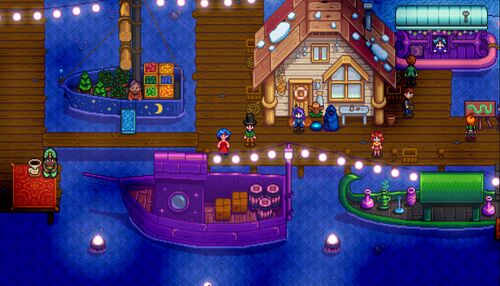 The Night Market is a festival that occurs between the 15th and 17th of Winter. Various boats and merchants will appear at the docks on The Beach, and offer to sell goods or take the player for a boat ride. The Night Market is open between 5pm and 2am, but the Submarine Ride closes at 11pm, and the Mermaid Boat closes at 12:30am.

Unlike other festivals, shops and homes throughout Stardew Valley (including the beach) are not closed on the days of the Night Market, and time continues to pass during the festival. Animals also need to be fed during the Night Market event; the game will not automatically consider them to be fed as with other Festivals.

The Coffee Merchant will give the player a free cup of coffee each night.

The blue boat between the docks sells a variety of purely aesthetic decorations, some of which change with the seasons. Players can purchase an unlimited number of each decoration. Decorations can be placed indoors or outdoors.

1,200g. The paintings rotate over a 3-year schedule, for a total of 9 paintings.

1,000g. Upon accepting, the submarine will descend for a while then open a trapdoor to allow the player to fish. The descent and ascent take approximately 30 minutes in-game time. When you are ready to go back up, simply talk to the Captain again. Alternatively you can use a Warp Totem to leave, maximizing fishing time.

Three fish can only be caught here: the Midnight Squid, Spook Fish, and Blobfish. Seaweed, Sea Cucumber, Octopus, and Super Cucumber can also be caught in the submarine ride. There is also a rare chance to catch a Pearl while fishing here.

The table below shows the chance of catching each item while fishing in the submarine.

The magic shop boat is located to the right of Famous Painter Lupini. It sells decorative items, seeds, a unique hat, and a unique fireplace, with different stock each night. Each item may be purchased in unlimited quantities. Seed sell prices are the same as at Pierre's General Store.

Note that Garlic Seeds, Red Cabbage Seeds, and Artichoke Seeds are not available until game year 2. Note also that the price of the Cone Hat changes over the 3 days of the Night Market, with the lowest price occurring on Day 2. The Grave Stone sold on Day 1 costs

150g less at the Night Market than it does at the Spirit's Eve Festival. The Log Section sold on Day 3 costs

150g less at the Night Market than it does at the Carpenter's Shop.

Rarecrows #7 and #8 can be purchased only after earning the first ones by donating items to the Museum.

The Mermaid Boat is open from 5pm to 12:30am. Upon entering, a mermaid will appear and begin singing to the player, accompanied by a cutscene. Her performance lasts 1 hour and 40 mins, but the player may leave at any time.

After the show, clam shells inside the boat can be clicked to play musical notes. Playing the correct notes in the correct sequence will award the player a special item.

The correct sequence of musical notes can be found in Secret Note #15, although finding the secret note is not required to complete the sequence. The tune played during the mermaid show also indicates the solution. Click below to see the solution and information about the special item awarded.

The Traveling Cart makes an appearance at the docks with her cart on a raft. She sells a selection of her usual items, including the Wedding Ring recipe.

Note that it's possible to complete Gathering, Slaying Monsters, and Fishing Quests during the Night Market. Talking to the villager will complete the quest, before scripted festival dialogue occurs.

Villagers who are married to the player do not attend the Night Market, but instead follow their normal Monday/Tuesday/Wednesday marriage schedules.

If Robin is working on constructing a building on the Farm, she will not attend the Night Market.