Not to be confused with Gold Ore or Gold Bars.

is the primary currency of Stardew Valley. The amount of gold a player has is displayed at the top right of the screen, directly below the time. All players start with

500g. "Total Earnings" and "Current Funds" can be viewed at any time on the Inventory screen of the pause menu.

Most shops accept Gold as payment for their goods and services. Exceptions include the Desert Trader, the Island Trader, the booths at the Stardew Valley Fair, the Casino, and Qi's Walnut Room.

The primary method of earning gold is to collect items by farming, fishing, foraging, mining, or engaging in combat, then selling the items by placing them in the shipping box on the farm. Gold is earned after the player goes to sleep for the night, and the amounts for each item are displayed on a summary screen.

Alternatively, items can be sold to various merchants throughout Stardew Valley, and gold can be collected immediately. Each merchant will purchase only specific items that correspond to the type of items they sell: Pierre's General Store buys edibles, the Fish Shop buys Fish, the Blacksmith buys metal ores and gems, etc.

The player may also complete quests to earn gold. Quests are either posted on the "Help Wanted" board outside of Pierre's General Store, or delivered directly to the player's mailbox on the farm. Quests involve acquiring/delivering items, slaying monsters, or catching fish. Upon completion of a quest, the player may earn gold by opening the Journal, selecting the completed quest, and clicking on the reward icon.

The player will also receive gold in the mail. The player's mother or father will send money after the player earns specific amounts of gold, Pierre will randomly send 'Cash-back Rewards Program' rebates, and Lewis will randomly send gold from the 'Stardew Valley Agricultural Fund' for being a member of the community.

There are 5 Achievements directly related to earning gold.

Whenever an item whose sell price is greater than

500g is taken into inventory, the popup box on the lower left of the screen will be shaded purple. 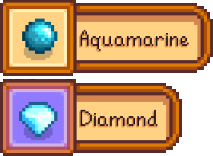