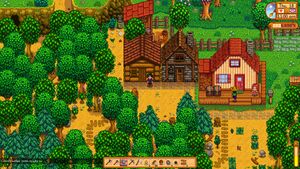 A screenshot of multiplayer showing two cabins and two players.

Multiplayer is an optional game mode in which 1–4 players can join the same world through split-screen, over LAN, or by IP address. Multiplayer is available on the PC (Linux/Mac/Windows) and console (PS4/Switch/Xbox One) versions, but not on mobile (iOS/Android) or PS Vita.

The player who created the world is the "host", and the other players are "farmhands". The host has the save file on their system, and can play it in both multiplayer and single-player mode. If the host isn't online or the farm isn't currently open to other players, then farmhands can't access the world or their characters in that world. Farm ownership can't be transferred to farmhands without modding.

A world can be created specifically for multiplayer, or converted from a single-player world to multiplayer anytime.

To start a new world specifically for multiplayer:

If the host loaded the world via "Co-Op" on the title screen, they can have both remote and split-screen players in the same world (subject to the restrictions).

Invite players to a single-player world

For the main player, see host a world. For other players:

Multiplayer mode is mostly identical to singleplayer mode, though certain features are specific to multiplayer only. 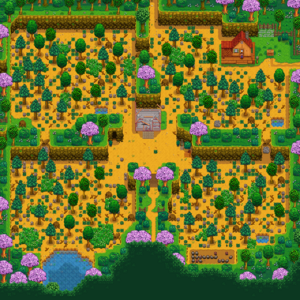 The Four Corners farm map was designed with multiplayer mode in mind. Each quadrant of the map features a small area for perks from some of the other farm maps to manifest, as well as a tiny pond for players in quadrants besides the quadrant with the large pond to draw water from. However, the Four Corners Map is also available for singleplayer.

The farm can contain up to 3 cabins (selectable during farm creation). For each cabin built, one player can join the farm. If the farm starts with fewer than 3 cabins (including if the farm was begun as a singleplayer save file), Robin can build up to 3 cabins total on the farm for

100g each. Cabin-building is instantaneous, so extra cabins can be built on the first day of the game.

The host player can also demolish a cabin at any time. Demolishing a cabin removes its occupant from the game, and places their inventory in a chest located where the cabin was.

A cabin can be upgraded at the carpenter's shop by the farmhand who occupies it, but not by the host or any other player. The interior layout of an upgraded cabin is identical to the interior of an upgraded farmhouse. As with the farmhouse, the physical footprint of the cabin does not change when upgraded.

When creating a new multiplayer save, a profit margin of 25%, 50%, 75%, or default (100%) can be chosen. Opting to lower the profit margin helps rebalance the economy in multiplayer mode by reducing the gold obtained when selling most items (including crops, forage, minerals, and cooked foods) to account for the increased productivity from the increased number of active players. For example, at 25% profit margin, Wheat is sold for

Purchase prices for seeds at Pierre's General Store and purchase prices for Grass Starter, Sugar, Wheat Flour, and Rice at JojaMart are scaled with the profit margin set. Prices for other items (including Blacksmith and Fish Shop shop items, buildings, and tool upgrades) and quest gold rewards are not affected.

1,500g despite the reduced income, so mining iron and crafting Crab Pots may be more economical.

Players can marry an NPC, which works the same way as single-player. Each NPC can only be married by one player at a time, and children are added to the married player's home.

Players can marry another player by giving them a wedding ring. Married players get a Stardrop in a purple giftbox next to their home beds after the wedding (equivalent to the Stardrop received from an NPC spouse). A home is eligible for children if it's owned by one of the married players, has the kids' room upgrade, doesn't already have two children, and both players are sleeping in its bed; the game will randomly let one player propose having children to the other, and if accepted, the child will be added to the home that both players are sleeping in (if eligible), else the other player's home (if eligible), else the current home.

Each player has their own experience points. Whoever commits the action will be the one to gain the experience.

Generally speaking, during a day time only pauses while the players attend a festival or when using /pause.
When hosting a multiplayer game, time will behave as in singleplayer until the first farmhand joins. This means the host can simply keep their inventory or menu open while waiting for another player to join.

While in a multiplayer game with 2 or more players time will pause when:

In multiplayer, no other circumstances will cause time to pause, skip forward or move at a different rate than normal.

In particular time will pass while:

Some actions remain possible while the game is manually paused using /pause:

Chat is a feature that allows communicating between players directly through in-game. There are also several commands that can be run in the chat to change settings, direct message other players, etc.

Commands can be run in the chat box, using a forward slash (/) before the command.

These commands are available for all players:

These commands only work from the host player:

The default limit for farmhands is 3 (4 players total), but can be changed on PC (without having to install any mods) by manually changing the game's config files.[2] Note that this is experimental and may make the game unstable.[3]

To change the limit, find the following file:

A value of -1 uses the default amount of players.