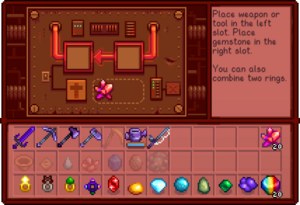 The Forge is located on Level 10 in the Volcano Dungeon. It is used to upgrade weapons, enchant weapons and tools, combine rings, and change weapon appearances.

A melee weapon (dagger, hammer, or sword) can be forged up to three times to improve its stats. Each forge costs one gem and 10/15/20

Cinder Shards depending on how many times it was previously forged.

Diamond as the gem fills all remaining forge levels with random upgrades, but consumes only 10 Cinder Shards.

A random enchantment can be added to any melee weapon or tool, with the exceptions of the Copper Pan, Scythe, Golden Scythe, and Trash Can. This costs one

Each weapon or tool can only have one enchantment, and the applied enchantment is random. However, another Prismatic Shard can be used to re-randomize it. Tools track the previous two enchantments applied to them so they're not reselected when reapplying an enchantment.

Upgrading a tool keeps its enchantment.

Enchantments are randomized based on the number of times any tool has been enchanted, so reloading the day and enchanting a different tool will change the progression.

Only applies to melee weapons (can't be applied to a slingshot)

A Galaxy Soul can be forged into a galaxy weapon at the cost of 20 Cinder Shards. Doing this 3 times (at a total cost of 3 Galaxy Souls and 60 cinder shards) will turn the weapon into a more powerful "Infinity" weapon. Adding just 1 or 2 does not affect the weapon. The weapons keep their enchantments and forgings when they are made into Infinity weapons.

Two different rings can be combined into one with stacked effects. This costs 20 Cinder Shards.

This has two restrictions:

Weapons and combined rings can be unforged to reset its properties.

Unforging is free, but only returns some of the Cinder Shards used to forge the item.

To begin the unforging process, place the item for unforging into the left square slot. Then click the red ⨯ symbol near the bottom right corner. The unforged item(s) will appear in inventory, along with any returned Cinder Shards.

The Forge is the only level of the Volcano Dungeon where fishing can occur. It is one of two locations in the game where players can catch Lava Eels. Crab pots cannot be placed in the forge.

There is a 5% chance the player can catch a present that contains the painting 'Physics 101'. This painting can only be caught once per player per game.[2]