This page lists many of the secrets discovered in Stardew Valley.

There are a few Easter eggs that are recurring or interlinked in Stardew Valley.

Hats can be placed on...

Mayor Lewis' lucky purple shorts have a number of secrets.

In multiplayer mode, if a player's randomized unique multiplayer ID (only editable in the save file) is divisible by 111, music they produce will sound off:

The ConcernedApe logo after clicking it.

Clicking on the ConcernedApe logo during the loading screen will cause the sunglasses (if present) to disappear and the eyes to open. A duck/splat sound will also be heard.

The game keeps track of how many times you launch it, and shows friendly messages in the bottom-left corner of the ConcernedApe logo screen based on that number.

PC/Mobile Only: Naming your character using an internal object ID number in brackets will give you the item that corresponds with the number whenever an NPC mentions you by your name. For example, entering [645][499][163] will give you an Iridium Sprinkler, Ancient Seeds, and a Legend. (This exploit also works with naming children and animals.)

Mobile Only: Naming a character with an invalid object item id (such as [26]) will generate an Error Item.

Entering ConcernedApe as the favorite thing when creating a character results in some additional text when consuming a Stardrop.

Entering anything containing "Stardew" as the favorite thing when creating a character results in the additional text "You feel an unwavering connection to the valley itself." appearing when consuming a Stardrop. Note that the "S" in "Stardew" must be capitalized.

A few rare animations can be seen in the background of the Shipping screen at the end of the day depending on certain conditions.[1] 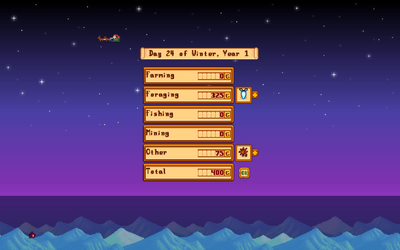 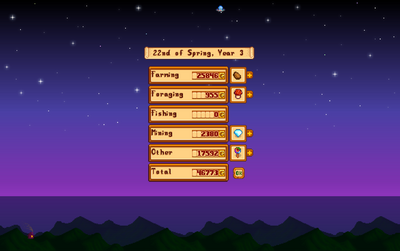 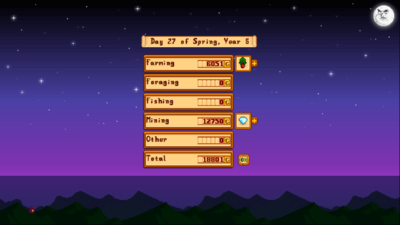 "The lonely stone on the Stardew Valley map."

The lonely stone also hasn't been mentioned by any villagers/characters nor is there any lore about it hidden in-game files or mentioned by ConcernedApe.

When you have at least four hearts of friendship with a character, clicking their sprite in the gift log (accessed from the social tab by clicking their entry) will play a sound and show a special animation (different for each character) for a few seconds.

The first letters in the Museum's incomprehensible Lost Book form these words:

Three secret statues can be found by placing items in locked boxes around the valley per these instructions:

The box behind JojaMart (to the northeast) doesn't do anything.

After finding and donating all four Dwarf Scrolls to the Museum, the player receives the Dwarvish Translation Guide. If the player proceeds to the Graveyard, one of the previously unreadable tombstones can now be read.

This points the player towards The Desert and the set of three pillars to the Northeast. Stepping into the center of the pillars while holding a Prismatic Shard will cause the shard to be transformed into the Galaxy Sword.

The Junimo Plush is a unique piece of furniture. It can be found by shaking a bush in the northwest corner of Pelican Town on the 28th of any season at exactly 12:00pm. 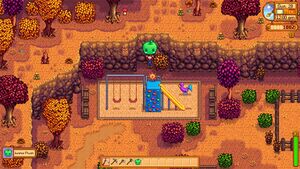 Location of the plush

After a Strange Capsule appears and breaks open, there's a 1% chance of glimpsing a dark creature wave after dark at the Bus Stop, or run behind trees and bushes in Pelican Town (Near the tree north of 1 Willow Lane, in the bush below 2 Willow Lane, and in the bushes next to the bridge leading to The Beach).

The plaques that can occasionally be found on the walls of the Skull Cavern have been found to contain text encoded by a cipher.[2]

The plaques that are found on the rough walled levels have been deciphered to give the following.

This may be a reference to the Purple Slimes that can drop Iridium Ore that are frequently found in large numbers at these levels.

The plaques on the walls of the levels inhabited by Mummies has been deciphered to give the following:

This may or may not refer to the Wizard who lives in Cindersap Forest.

The plaque above the Forge has been translated [3] to say:

which is Dwarvish for:

A Stardrop can be obtained from Old Master Cannoli in the Secret Woods, in exchange for a Sweet Gem Berry.

When choosing "Supplies Shop" in Marnie's Ranch, the text under Marnie's portrait normally reads "Animal supplies for sale!" But there is a 0.01% chance for the text to read

When entering Robin's or Marnie's shop, there is a chance for a dialogue bubble to pop up with them saying

When entering Pierre's shop, there is a chance for a dialogue bubble to pop up with him saying

When entering The Stardrop Saloon, there is a chance for a dialogue bubble to pop up with Gus saying

When entering the Museum, there is a chance for a dialogue bubble to pop up with Gunther saying

There are two secrets with the piano in In Elliott's Cabin:

Very rarely, a green creature may appear south of the main docks at the beach. There's no way to interact with the creature; after a short while, it'll swim south and disappear off-screen.

There's a roughly 0.06% chance per second (0.001% per game tick) that the creature will try spawning in a random tile near the docks (see spawn area below). The creature will only spawn if that random tile is open water, and there's a vertical line of open water between that tile and the bottom of the map, which significantly reduces the likelihood. There's no limit to the number of creatures that may spawn, but more than one creature at once is extraordinarily rare and has never been reported.

The same creature can be seen in Krobus' 14 heart event, in which it carries the shadow person on its tentacles (note that in this event, the creature is not a random occurrence like the one found during regular gameplay).

Using the Shrine of Illusions to add item spawn codes to your character name will randomly show one of these chat messages:

Achieving perfection in Mr. Qi's walnut room unlocks access to The Summit. When you visit it, there's a chance you'll see something fly past in the distance:

In the first Stardew Valley Cup live event, ConcernedApe said that there's one secret that he didn't think anyone ever found. He said that:

"I guess you might say a message or something. And actually the thing is the message is not even really relevant anymore. It was like originally revealing something that's like actually not even true anymore. But it's still I don't think anyone has found it, and I don't know if anyone ever will. Because it's extremely obscure to find it."