Honey is an Artisan Good produced by the Bee House every 4 days in every season other than Winter. It may be purchased from the Oasis year-round on Fridays for

200g. Fully-grown flowers planted near the Bee House will have an effect on the type of honey produced, increasing its sale price. Flowers are not used up when a hive produces honey, and multiple hives can make honey from the same flower, so one flower can service a very large number of hives.

If no flowers are planted near the Bee House, or if a Bee House has produced flower honey, but the flower is harvested before the honey, the honey will become "Wild Honey," the lowest level of Honey. Similarly, if a Bee House is removed with a tool while it has flower honey ready for harvesting, the honey will go into inventory as "Honey", which is functionally identical to Wild Honey. Honey purchased from the Oasis or Traveling Cart is also called "Honey", and is also functionally identical to Wild Honey.

Honey can be made into mead by placing it inside a keg.

The formula used to calculate the sale price of honey is base honey sell price + (base flower sell price × 2).[1]

Flowers within 5 tiles of a Bee House will affect the type of honey produced. 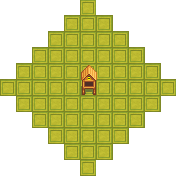 It is an option for the

Artisan Bundle in the Pantry.

Honey may be placed in a Keg to produce Mead. Mead may be aged in Casks to increase its quality.

Honey is used in the spool of the Sewing Machine to create the dyeable Simple Dress.

One Honey (of any type) may be requested by several fish in Fish Pond quests.