The Fish Pond is a type of farm building purchasable from Robin at the Carpenter's Shop. It takes two days to build and occupies a 5x5 tile space.

The following can be placed in a Fish Pond:

The following cannot be placed in a Fish Pond:

Fish in a Fish Pond have a chance to produce Roe or certain other items. The chance of producing an item and the item produced is determined randomly based on the contents and population of the Fish Pond. Also, fish reproduce up to the limit of their Fish Pond, except Tiger Trout, which do not reproduce. The time it takes for a new fish to spawn varies from 1 to 5 days, depending on the fish.

Fish can be harvested one at a time by casting the fishing pole into the pond. Harvested fish are always of regular quality (even if higher quality fish were thrown into the pond). Although energy is consumed when casting the rod into the pond, a simplified mechanism is used for catching the fish: fish are caught automatically (without the minigame), no bait is consumed, and the durability of tackle is not depleted. The fish do not count towards the Fish Collection, and no fishing experience is gained by harvesting fish from a pond. However, fishing experience is gained when completing fish pond quests or collecting items produced by a pond.

Each pond holds only one type of fish at a time. Ponds are populated by holding the desired fish (with the inventory menu closed) and right-clicking on the pond to "throw" the fish in. Attempting to throw in a legendary fish yields a prompt saying "The [fish] wouldn't be happy in there." Attempting to throw a fish into a pond that already contains a different type of fish yields a prompt saying that type of fish doesn't want to live in a pond of another type.

A fish pond can be emptied either by using a fishing rod to catch and remove each fish, or by selecting the “empty pond” option in the fish pond menu.

Catching and removing all the fish simply reduces the pond population but does not reset the pond. Only the same species of fish can be added to the pond; all quest-related capacity increases are retained.

Selecting the “empty pond” option in the fish pond fully resets the pond, returning it to the same state as a newly built pond. However, all fish in the pond are lost. To avoid this, catch and remove all of the fish before resetting the pond.

Fish in a pond reproduce at a fixed rate until they reach the pond's current capacity. Fish quests allow the player to increase the capacity of the pond, up to a maximum capacity of 10 fish.

The fish spawn frequency is species dependent, and ranges from 1 to 5 days for most fish (the one exception is Tiger Trout, which does not reproduce). More expensive fish spawn more slowly. Fish will reproduce even if only one fish is present in the pond. Instead of waiting for fish spawning, more fish can be thrown into the pond up to its current capacity.

A new fish quest is initiated when population growth is prevented by the pond capacity. This is indicated by an exclamation point appearing in the center of the pond. A quest is not triggered if the player throws fish into a pond to reach capacity. Instead, the player must wait 1-5 days for the fish quest to start. (Adding fish to the pond does not reset the fish spawning clock, so the next quest will start Spawn_Frequency days after the last spawning event or completed quest). Also, removing fish from a pond with an active quest disables the quest and removes the quest exclamation point, but it does not reset the quest -- as soon as the pond returns to capacity, the quest resumes with the same item requested again.

The fish quests require the player to fetch a specified number of one item and throw it into the pond. If multiples of an item are requested, they are added one at a time, meaning different qualities can be combined. When a quest is completed, the fish will jump out of the pond and thank the player (using one of 19 responses). Also, the player is granted 25-45 Fishing XP (dependent upon the fish spawning frequency, XP = 20 + 5 × Spawn_Frequency).

The fish population does not immediately increase when a quest is complete. Instead, the fish spawning clock resets to zero days, and the next population increase happens Spawn_Frequency days later. This means that even if a fish quest is completed immediately, the fish population takes more than twice as long to increase each time there is a quest. For example, instead of taking 45 days for an Ice Pip pip pond to reach a population of 10, it takes at least 69 days (assuming only one initial fish is thrown into the pond).

Fish ponds may produce items in the chum bucket daily, with items being more likely at higher fish populations. The most common item is Roe, but at high populations, some fish can produce rare or valuable items.

Any produced items are collected by clicking on the fish pond. Uncollected items only persist to the next day if new items are not produced; otherwise the new items replace the uncollected items. Collecting an item grants Fishing XP according to XP = 10 + (0.04 × the sell price of the item)

The base chance that an item is possible ranges from 23% to 95% (base_chance = (population of pond × 0.08) + 0.15)[1]. Empty ponds never produce items. The game then selects which item will appear, based on the fish species and population. The item-selection can produce no item (especially at low populations), meaning that the overall daily item chance may be much lower than the base 23-95% value.

The table below shows all possible fish pond products, along with the required fish pond population for the item to be possible. The column "% of Items" provides each item's chance as a fraction of all items produced by the pond[2]. The column "Overall Daily Chance" is the chance of the item appearing on a given day, obtained by multiplying the base chance (23-95%) by the "% of Items". Both chances may vary depending upon the fish pond population, as may the possible counts of a given item. More details on all item chances are provided on each individual fish page.

When Quest Is Pending

If player is male

If player is female

After Completing A Quest 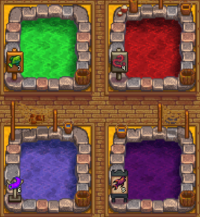