Krobus is the only friendly monster players will encounter, however he still refers to other hostile monsters as his friends. He is a shadow person who lives in the sewers. He sells a variety of rare goods. He is also available as a roommate.

Krobus can always be found in the sewers once The Player obtains the Rusty Key.

Krobus' Shop is open all hours every day, even festival days.

A different item of specific quantity will be available for purchase every day:

Krobus is a shadow person and, although he isn't hostile, still refers to other monsters as "his friends". He lives in the sewers and normally isn't seen outside interacting with other villagers. He dislikes dwarves, stating that a 1,000 year war between the dwarves and his people recently ended. He believes if the dwarves knew where he was, they'd send an assassin.

The Wizard is aware of his presence and intervenes to prevent conflicts.

You can give Krobus up to two gifts per week (plus one on his birthday), which will raise or lower his friendship with you. Gifts on his birthday (Winter 1) will have 8× effect and show a unique dialogue.
For loved or liked gifts, Krobus will say

For neutral gifts, Krobus will say

For disliked or hated gifts, Krobus will say

*Note that Dinosaur Eggs are considered Artifacts and not Eggs for gifting purposes.

If the player is not married, Krobus will move into the farmhouse three days after accepting a void ghost pendant. Like the marriage candidates, he will add his own room to the right of the bedroom. He will not set up an area in the space behind the farmhouse.

He leaves the Farmhouse only on rainy days, when he will stand on the front porch. At 13 hearts, he will give the player a Stardrop, like a spouse, and may change wallpaper or flooring like a spouse.

Although the player's relationship with Krobus is platonic, the game's roommate mechanics are almost identical to the marriage mechanics, with the following exceptions:

After Krobus moves into the Farmhouse, he is replaced in the Sewers by a chest, which sells his usual items. 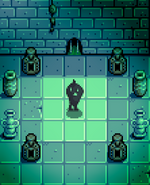 A Picture of Krobus in The Sewers