Lava Crabs are an enemy found in the Mines. 60 rock crabs (any type) need to be killed for the Monster Eradication Goal at the Adventurer's Guild.

They disguise themselves as stones, sometimes surprising the player. When immobile, they are invulnerable to attack, though they can be hit with a pickaxe to knock them back, making them mobile again.

Lava Crabs may be differentiated from rocks by striking them with a weapon. A Lava Crab will make a knocking sound and a zero damage indicator will pop up when hit with a weapon, while a rock will not.

The Lava Crab can only be dealt damage if it is mobile, and not hiding beneath its shell. Strike an immobile Lava Crab with a pickaxe to make it mobile again. 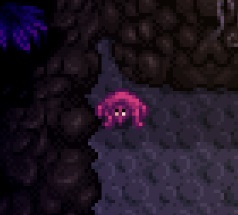