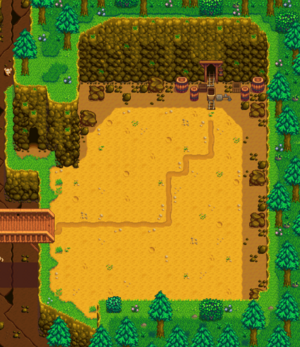 The quarry mine entrance, above the bridge

The Quarry Mine cave entrance is located on the left edge of the Quarry, north of the bridge. It is outside, not located in The Mines. Inside the cave is a ladder that goes down to the mine. The mine itself consists of one long level.

At the end of the cave is a statue of the Grim Reaper, and upon first encounter the statue holds the Golden Scythe. When the statue is right-clicked on, the scythe will be added to the tool set if the inventory is not full. If it is full, the player will get an "inventory full" message. Freeing up an inventory space will allow them to receive the Golden Scythe. Any time the statue is clicked on afterwards the player will be transported back to the entrance of the quarry mine.

The Quarry Mine contains three monsters: Haunted Skulls, Copper Slimes, and Iron Slimes. The mine is populated with common gray and brown rocks and Copper and Iron Nodes.

The quarry mine resets at the end of the day, instead of when exiting it, so it cannot be repeatedly "farmed" in a single day.

Passing out due to low health in the Quarry Mine will result in the player being woken up inside the entrance to the regular Mines (including the penalties).

Monsters, crates, and barrels in the Quarry Mine may randomly drop the same special items that can be found in the Skull Cavern.