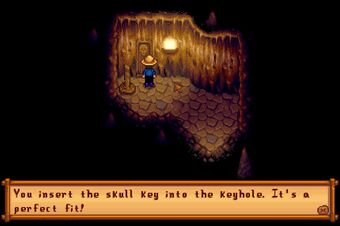 For ladder/shaft spawn rates, special monster drops, and the contents of crates and barrels, see The Mines.

The Skull Cavern is located in the northwest area of the Desert. It is initially locked and requires the Skull Key to gain access.

A shaft for faster descending

There is no practical limit to the number of floors, or levels, in the Skull Cavern.[1] Similar to the Mines, the player advances through floors in the Skull Cavern by finding a ladder on each floor, either by mining rocks or defeating enemies.

The player can sometimes find a shaft, or hole, which makes it possible to skip 3-15 floors. There is a 20% chance for a rock to spawn a shaft instead of a ladder. The way this works is that a pseudo random integer x between 3 and 8 inclusive is chosen with a 90% chance that the player drops x levels and a 10% chance that the player drops 2x-1 levels. The amount of levels dropped is predetermined based on the mine level, game day, and game seed. In particular, Luck does not affect the chances of jumping down a certain number of levels. In addition, this means that if there are multiple shafts on a given level, they will all drop the player the same number of levels, so it does not matter which shaft is chosen. Jumping down the shaft causes Health damage equal to 3x the number of levels skipped (although jumping down a shaft will never reduce health to less than 1). Note that if a shaft above floor 100 is calculated to drop the player past floor 100, it will be modified to only drop the player to floor 100. [2]

Unlike The Mines, there is no elevator to save progress, but on every floor there is a ladder at the starting point where the player can leave the Skull Cavern. Each visit must start again from the first floor. If the player runs out of health while exploring Skull Cavern, they will wake up sometime later on the same day in Harvey's Clinic. A fee of

1,000g will be deducted for emergency surgery. Some items may also be lost. Passing out at 2:00 am will cause the player to lose

The chance to find Iridium Ore increases steadily as the player descends into the Skull Cavern. The monsters in the Cavern also have a chance to drop ore and Iridium Bars, as well as special items. It can be a good idea to bring the Lava Katana or Galaxy Sword, as enemies are particularly strong. High Luck increases the frequency of ore veins and the appearance of ladders/holes. Rapid descent to floors with a higher chance of spawning Iridium Nodes is often more efficient for acquiring ore than through exploration. Staircases can be stacked, so a single inventory slot can hold 999 staircases. Even blindly placing staircases will take some time though; the lower the player descends with staircases, the less time they have to explore the caverns.

After entering the Cavern for the first time, a letter is received on the following day from Mr. Qi. The letter begins the quest Qi's Challenge, which is completed by reaching floor 25 in the Skull Cavern. Completing the quest awards

10,000g, delivered by mail the following day. If the player reaches level 25 of the Skull Cavern during the first visit, the quest will automatically be fulfilled the next day.

"Qi's Hungry Challenge" is a possible, repeatable Special Order, that may be accepted in Qi's Walnut Room on Ginger Island. It is completed by reaching floor 100 of the Skull Cavern within the given time limit. While this quest is active, no food or drink items can be consumed while the player is in the Skull Cavern. Buffs from food/drink before entering the Skull Cavern will stay active. While this quest is active, Big Slimes may occasionally have hearts that will give 10 health points when slain. Another strategy to regain health without eating is to equip one or more Vampire Rings or to use a weapon with the Vampiric enchantment. The use of staircases is permitted. Completing the quest awards

The "Skull Cavern Invasion" is a possible, repeatable Special Order, that may be accepted in Qi's Walnut Room on Ginger Island. It is completed by reaching floor 100 of the Skull Cavern within the given time limit. While the quest is active, stronger variations of monsters occupy the Cavern; similarly to the Dangerous Mines. The use of staircases is permitted. Radioactive nodes can spawn here, like the Dangerous Mines. Completing the quest awards

Time runs more slowly in Skull Cavern than elsewhere in the game: whereas one hour of game time normally lasts 43 seconds, in Skull Cavern one hour lasts 54 seconds. However, time reverts to normal 43-second hours in multiplayer games and on Prehistoric Floors.[3] This has two main implications:

This adjustment in timing has no effect, however, upon other aspects of the game, such as equipment processing times. For example, Honey placed in a Keg at noon is ready with Mead at 10 pm even if the player spends most of that time in the Skull Cavern.

Shown below are foods with Buffs that are useful when exploring the Skull Cavern. Note that eating a food with buffs will wipe out any active buffs and replace them with the buffs from the newly eaten food. If the newly eaten food has no buffs, the existing buffs will remain in effect. Coffee, Triple Shot Espresso and Ginger Ale are an exception to this rule; they will stack with other food buffs (but not each other).

Bombs make quick work of densely-clustered stones and ore veins. They can also be used for permanently defeating Mummies.

Bombs can be crafted, or purchased from Dwarf:

The Slingshot's Explosive Ammo is also effective in dealing with small groups of stones, Iridium Ore deposits, and incapacitated Mummies. Loading the Slingshot with Gold Ore deals substantial damage, making it potentially useful for dispatching tough targets. Explosive ammo can be crafted, or bought at the Adventurer's Guild for

Prehistoric floors are a type of infested floor containing mainly Pepper Rex monsters. Mutant flies and Iridium Bats can also spawn and attack the player there. Dinosaur Eggs and Fiddlehead Ferns can be foraged on Prehistoric floors. Foliage on this floor has a chance to yield an Ancient Seed when cut down. Below floor 6 there is a ~2.2% chance to encounter a prehistoric floor.[4]

Because prehistoric floors are infested, all enemies on this floor must be killed before a ladder appears.

Small rooms containing treasure chests, similar to those in The Mines, can randomly appear at level 10+. Daily luck and Luck Buffs affect the chance to find Treasure Rooms. The probability of encountering one when entering a new floor equals to 0.01 + (Daily Luck / 10) + (Luck Buffs / 100)[4]. This means Treasure Rooms have a base chance of 1% to appear with daily Luck increasing the chance by 1% at best or decreasing by 1% at worst, with the Special Charm adding 0.25%, and food buffs adding 1% for every point of Luck. In multiplayer, the luck values taken into account are the average of luck stats of players present in the Skull Cavern. Floor 100 of the Skull Cavern is guaranteed to contain a treasure chest. The only exception is during the run where the player completes the secret.

Below is a collapsible table of all possible treasures that can be randomly found inside Treasure Chests in the Skull Cavern.

After reading Secret Note #10, the player will find Mr. Qi at level 100 of the Skull Cavern. A cutscene ensues in which: