This page explains how to edit maps. This is an advanced guide for modders. 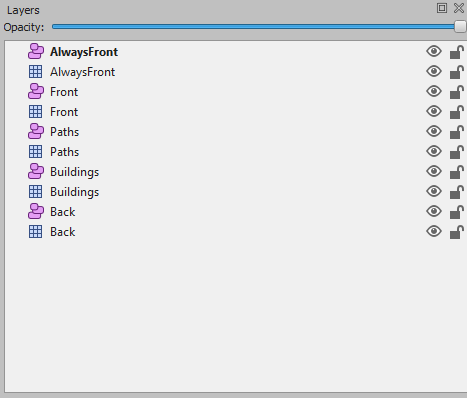 Each tile has an (x, y) coordinate which represents its position on the map, where (0, 0) is the top-left tile. The x value increases towards the right, and y increases downwards. For example: 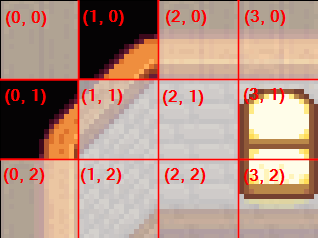 There are two map formats used in Stardew Valley modding: .tmx (from the Tiled map editor) and .tbin (from the now-deprecated tIDE map editor). The features supported by both formats are almost identical, but there are a few differences:

.tmx is recommended per the above, but both formats are fine to use, and you can convert between them in Tiled by clicking File > Export As.

Tilesheets are the .png files used as source images. Tilesheets have no animation, properties, terrains, or anything else but pixels associated with them -- they're just images. Tilesets are Tiled's XML files that contain all the information about how the map uses the source image. They are confusingly named and often used interchangeably.

There are two main ways to edit a map.

Creating a SMAPI mod requires programming, but it's much more powerful and multiple SMAPI mods can edit the same map. If you want to use this approach:

The rest of this guide assumes you're using Tiled, but many of the concepts are transferrable and you can use both Tiled and SMAPI (e.g., create/edit maps in Tiled and load/edit them in SMAPI).

Tiled is a popular map editor that can be used to edit Stardew Valley maps, no programming needed. You need to unpack the map's XNB, edit the map, and make a Content Patcher or SMAPI mod to load your map. If you want to use this approach:

(If you use xnbcli to unpack the original game maps, you'll need the .tbin plugin even if you plan to use .tmx since xnbcli still produces .tbin files.)

Important note: when making custom maps, always start with a vanilla map and edit it. Don't try to create a new map in Tiled; the game needs certain tiles, map properties, etc to be present. Also note that when making a map edit or adding a custom map, sizes bigger than 155 for height and 199 for width will break the layering.

Note that the map must be built in a certain pattern; look at the maps in the Content/Maps folder for examples. It's often easier to start from an existing map and modify it, instead of starting from scratch.

ⓘ
Using Content Patcher to add custom locations is strongly recommended.
You can add new locations in C# yourself, but be aware of factors like object persistence and NPC pathfinding that are easy to get wrong. If you really want to do it yourself, use the specialized LoadStageChanged event to add the location to Game1.locations during the CreatedInitialLocations and SaveAddedLocations stage.

You can add new sprites, tiles, or images to a map, from both custom and vanilla sources. If you're editing a vanilla map, make sure to prefix custom tileset names with z_ to avoid shifting the vanilla tilesheet indexes.

If you want to use a tilesheet like spring_outdoorsTileSheet.png in your map, adding a new tileset from a .png file means you need to re-animate any animated tiles, and re-add properties like diggable. (You'll also lose any terrain types that had been created for that set.) You can avoid this by first exporting them from an existing map, then using external tilesets, instead.

If you are already using a tilesheet image, you can replace its tileset.

If you made a your own tilesheet and are adding it to a map the first time, you can create a new tileset from image.

Painting tiles onto your map

Each map can have multiple map properties, which define attributes and behaviour associated with the map like lighting, music, warp points, etc. Each property has a name (which defines the type of property), type (always 'string' in Stardew Valley), and value (which configures the property). See known properties below.

Tile properties are set on individual map tiles. They can change game behaviour (like whether the player can cross them), or perform actions when the player steps on or clicks the tile. Each property has a name, type (always 'string' in Stardew Valley), and value. In Tiled these are represented by two types: object properties only apply to the selected tile, while tile properties apply to every instance of that tile. In general you'll always set object properties, so we'll only cover those.

Note that tile properties need to have a tile associated with them; if there is no tile, they'll simply not be applied.

To edit properties for an existing object:

To add a new object:

You can edit the tiles for an existing map. See the Tiled documentation for more info.

You can animate tiles to create effects like Gil in his rocking chair (see example at right).

You can rotate and flip tiles without needing to create rotated/flipped versions of the tilesheet. This needs SMAPI 3.4 or later to be installed; the base game doesn't recognize tile transforms.

Players can sit on chairs that are part of the map. This works by checking the tile on the Buildings layer, and comparing its tilesheet and tilesheet index to the data in Data\ChairTiles.

Each entry has a key in the form sheet filename/tile X/tile Y:

The following properties are used but apparently have no effect: Arch, Debris, Spouse, and Fish.

¹ Map properties are primarily handled in various methods of the GameLocation class, particularly resetLocalState.
² The T value (short for true) is conventional, but any non-empty value will work too.

The TouchAction property makes something happen when the player steps on the tile:

The Action property makes something happen when the player interacts (e.g., clicks) with the tile:

The Paths layer has icon tiles from the paths tilesheet which affect game behavior on the map:

The tile indexes shown in the table.

When you replace a vanilla map, don't change the order or IDs of the original tilesheets. Prefix new tilesheet IDs with z_ to avoid changing the original order.

Why this causes problems
For example, let's say you replace a map which normally has these tilesheets in Tiled: 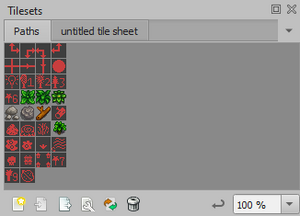 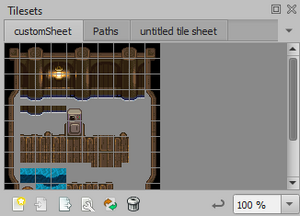 If the game tries to access a tile from the first tilesheet, it will get it from customSheet instead of the expected Paths tilesheet. That can cause anything from visual glitches (e.g., showing the wrong tile images) to outright crashes (especially if the new tilesheet is smaller than the one it expected).

To avoid that, always keep the original tilesheets in the same order and prefix new tilesheets with z_ so they're added at the end: 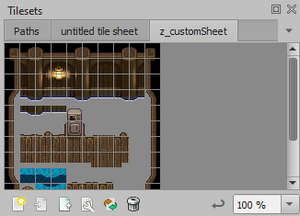 How to fix an affected tilesheet
See "mod reordered the original tilesheets" below.

Local copy of a vanilla tilesheet

When editing a map in Tiled, you may need to copy vanilla tilesheets like path.png or spring_town.png into the map folder for Tiled to find. If the tilesheet is still there when you load the game, SMAPI will use it for your map instead of the game's vanilla tilesheet, which may have unintended effects (e.g., edits from recolor mods won't work in your map).

To avoid issues, you can either...

The game makes some assumptions about maps which may break for modded maps. These are the known issues:

'Save as' in Tiled

When a map tilesheet is missing, never use the locate option to use a tilesheet from a different folder. That will add a complex tilesheet path which won't work in-game. Instead copy the tilesheets into the same folder as the map, and reference them from there.

"Tilesheet paths must be a relative path without directory climbing (../)"

This isn't allowed since it's very fragile (e.g., players might install your mod in a different folder path).

For a screenshot guide of steps 3-5, see these images provided by Discord user foggywizard#7430.

After fixing it, the above example would look like this:

What does this mean?
See tilesheet order for more info.

How do I fix it?
Always keep the original tilesheets in the same order and prefix new tilesheets with z_ so they're added at the end:

To rename an affected tilesheet in Tiled:

What does this mean?
You replaced one of the vanilla maps, but your custom map doesn't have all of the original map's tilesheets (or you changed their names in Tiled). This will cause a crash if the game tries to access the missing tilesheet.

How do I fix it?
Compare the original and custom maps in Tiled. For each tilesheet in the original map, make sure it's also in the custom map and has the same name (even if you're not using it).

If you need to rename a tilesheet:

This page mainly covers editing maps with Tiled, but you can make the same changes programmatically using a C# SMAPI mod. There are two main approaches to changing a location in C# code.

Most map edits should be applied using the AssetRequested event, so your changes aren't lost if another mod reloads the map. This works with the Map asset directly before it's used by the in-game location; that means you can't use location methods at this point, but you can make any changes you want before the map is read (e.g. change warps). See the events page for help using events.

For example, this mod code edits the town map and adds an optional GetTile helper method:

Now you can make any changes you want to the map before it's loaded by location. For example, you can...

See also SMAPI's map edit helper, which lets you do things like merge a custom map area into the map.

After location is loaded

After the in-game location is loaded, you can edit locations and their maps using the game's helpers. Be careful doing this though: another mod (or sometimes the game itself) may reload the location at any time, which would lose your changes if you're not careful.

For example, within any in-game events you can...