The Bus Stop is an exterior map near the center of Stardew Valley, and is where you first arrive at the start of the game. The main path through this area connects The Farm to the west with Pelican Town to the east. By following the road to the west you can also access the lower section of the Backwoods (the road cannot be followed to the east).

The Minecart in the northwest corner of the map is initially broken; once repaired, it provides access to the Mines, Pelican Town near the Blacksmith, and the Quarry.

Pam becomes the Bus Driver once the bus is repaired. She arrives at the Bus Stop at 10:10am and will leave at 5:00pm every day, and tickets are available to purchase for

It is possible to get the bus earlier than 10am by waiting for Pam outside her trailer at 8.30am and standing in her way. Once she walks through The Player, she will walk significantly faster than usual and reach the bus stop at 9:30am, and a ticket can be purchased as soon as she arrives. Purchasing a ticket at the machine triggers the bus to take The Player to the Calico Desert. Tickets include the return trip from the Desert to the Bus Stop.

It is not possible to take the bus to the Desert on Spring 25, due to Pam's appointment at Harvey's Clinic. You can use a Warp Totem: Desert or the Desert Obelisk to travel to the Desert.

If you leave your horse by the bus stop, when you return from the desert a message will appear on-screen saying "Your loyal horse waits patiently for your return." or "[Horse's name] is wondering where you have been." 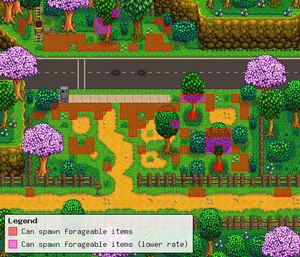 Locations at the Bus Stop where forageable items can spawn.

Forageable items found on the ground at the Bus Stop are:[1]

Forageable items spawn at an average rate of 1.0 per night in spring; in summer, fall, and winter the rate is 0.8 per night.[2] The map shows the possible locations as red and magenta tiles; when the original trees are present, the magenta tiles have a 90% smaller chance of spawning items because they are identified as being behind the original trees.

Artifacts that can be found by digging up Artifact Spots at the Bus Stop are:

Other possible items are: 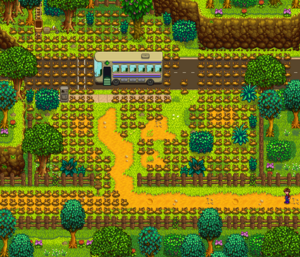 Locations at the Bus Stop where villager paths can destroy items.

Only two villagers walk through the Bus Stop map and have the potential to destroy items:

The "Bus People" map area was an unused part of the game's introduction. The player was in control at this point, and could move around and interact with people and objects on the bus. This scene was removed from the game before its initial release, but some of the data related to this scene can still be found in the game's files.

The source code file Content\Strings\StringsFromCSFiles.xnb contains messages that would have been displayed when the player interacted with the various elements of this scene.

When the player talks to the bus driver after talking to Haley, an event will start playing involving an unknown character named Dobson. It's possible that "Dobson" was later replaced with the JojaMart manager, Morris. The source code file Locations\Bus.cs contains the actions and messages that would be take place if the event were able to play out.

The bus ticket shown below was never implemented in the released version of the game. It was intended to appear in the Player's wallet. In v1.3, the bus ticket image was replaced in game files with the Magnifying Glass image.