The Island Farmhouse is the player's auxiliary residence on the Ginger Island farm. It cannot be accessed until the player unlocks Island West.

The building is initially in a state of disrepair, making it unusable. It can be repaired for

20 Golden Walnuts. Like other Golden Walnut purchases, the construction/repair happens immediately upon payment. The repair includes the addition of a Shipping Box outside. Neither the building nor the shipping bin can be moved.

Repairing the farmhouse allows players to ship goods and spend the night on Ginger Island without passing out. The repaired farmhouse comes furnished with a kitchen and a Tropical Bed for each player. Like the mainland farmhouse and cabins, players can decorate the interior of the island farmhouse with furniture, wallpaper, and flooring.

The player has the option to pay another

5 Golden Walnuts to build a mailbox and receive mail on the island. With that upgrade, mail is delivered each morning to the farmhouse where the player spent the previous night.

20 Golden Walnuts. This obelisk simplifies travel back to the mainland. With the Island Obelisk on the main farm, the entire round trip can be similarly simplified. 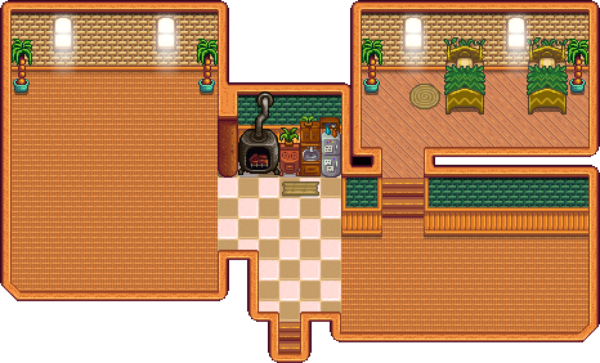