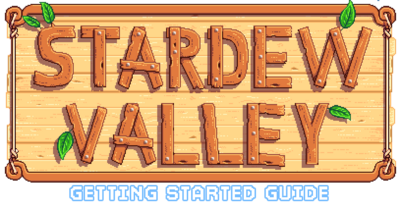 Stardew Valley is an open-ended game, allowing the player to achieve goals non-linearly.
There are various ways to earn income and many activities to choose from including farming, fishing, foraging, mining, combat (fighting enemies), crafting, cooking, gift giving, completing quests, donating to the Museum and restoring the Community Center. 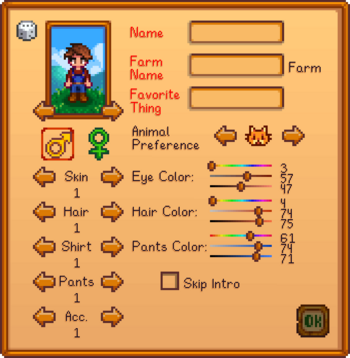 If the player puts anything containing Stardew (capital S), then the following message will appear.

Players can later change their appearance for

500g, in the Wizard's Tower, after reaching 4 Hearts of friendship with him or gaining access to the Witch's Hut and using the portal within.

At the character creation menu, there is a button with a wrench icon

that contains all of the Advanced Options, which are:

After selecting a map, it cannot be changed, characters are permanently tied to their map type once created. Space-wise each map takes up the same area, but there are different amounts of usable/farmable/buildable land on each.

Crops needs to be watered daily in order to grow. The starting watering can only waters one tile at a time and can be refilled at any pond, river, or other body of water. This includes the kitchen sink, after getting your first house upgrade.

Crops need to be watered every day. Crops that are not watered will not die, but they will not grow either.

The best times to upgrade the watering can are the day before it is predicted to rain, as the rain will water the crops, or the 27th day of the season after watering any crops that are expected to ripen on the 28th. The Blacksmith will need 2 days to upgrade any tools, including the watering can.

Energy limits productivity. One of the main ways to overcome this is by eating food. Eating food is an action, for which default controls are Right Click or type X with the food highlighted in your inventory and then click Yes in the confirmation dialogue to eat the food. Most crops and many foraged items can be eaten in order to regain energy.

Sleeping at the end of the day will restore the players' energy. After 12:00AM, the player won't restore 100% of the energy. If the player is exhausted when they go to bed or forced sleep at 2:00AM, they'll wake up in the morning with their energy level about half restored.

On Multiplayer, lying in bed will regain energy over time.

The Spa will fully restore energy over a short period of time.

Professions (level 5 and 10) can give the player a boost on yielding products, including more products gained, additional selling price, using less inventories and others. The player's choice of a level 5 profession will determine which profession choices are available at level 10.

Giving gifts to villagers will increase their friendship rating. You can give a gift by highlighting it in your inventory or selecting it by typing its hotkey number and then left clicking on the person to whom you wish to give the item. As friendship is earned villagers will send cooking recipes or gifts through the mail, give you access to their bedrooms, and treat you differently in dialogue. Unique cutscenes and interactions can also occur as friendship is earned. The player must also earn a high level of friendship in order to date, and eventually marry, an eligible villager.

The television provides useful information, such as weather forecasts, daily luck, free cooking recipes, and other general tips. All players will have one inside their home when beginning a new game.