The Mega Bomb is a one-time use explosive item. It damages certain items within its radius. Other items are impervious to its effects.

1,000g. Kent may randomly send a Mega Bomb in the mail. Squid Kids, Iridium Bats, and Haunted Skulls may also drop a Mega Bomb when slain. The Desert Trader will trade 5 Iridium Ore for 1 Mega Bomb. It can be won from the Crane Game inside the Movie Theater, during any season. Five Mega Bombs may occasionally be found in Treasure Rooms in the Skull Cavern. 3-5 Mega Bombs may occasionally be found in Supply Crates on the Beach Farm provided the player has upgraded the Farmhouse at least two times.

Tip: Due to the wide blast area it is often a challenge to use the Mega Bomb without taking damage. Ensure ample healing supplies are available when using this.

Note that the following is not an exhaustive list:

The Mega Bomb has a radius of 6-8 tiles. 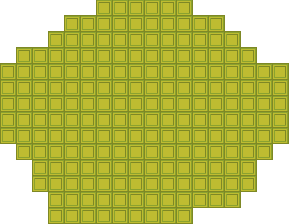 A Mega Bomb can be used in the spool of the Sewing Machine to create the Bomber Jacket.

It can also be used as a red dye color at the dye pots in Emily's and Haley's house, located at 2 Willow Lane.